With the Patron of Art Edition 2014 Montblanc pays tribute to the grand master of piano manufacturing, Henry E. Steinway, the man who revolutionized the world of music, dedicating his life to the advancement of the arts. German-born Heinrich Engelhard Steinweg (1797 – 1871) built his first pianos in his kitchen, before immigrating to the United States to set up one of the greatest legacies in modern music history. With his countless patents, Steinway pioneered the modern piano and set the high standards that still prevail in piano manufacturing today. He supported many artists through the Steinway Artists Programme that still promotes musicians today, and he made music accessible to large audiences at the Steinway Hall, once the largest concert venue in New York City. Created with traditional manufacturing techniques and the quest for perfection in the Montblanc Atelier in Hamburg, the Montblanc Patron of Art Edition Henry E. Steinway 4810 features the distinctive black and gold colour combination of a classic Steinway grand piano, with the barrel in deep black lacquer and gold plated fittings. The fountain pen cap is decorated with the heart of the iconic music instrument – the harp, or overstrung piano. Hidden inside the piano, these strings play a central role in producing the instrument*s unmistakable sound, much like Steinway*s discreet role in shaping modern music history

The shape of the gold-plated clip references the once-patented screw clamps used for bending the grand piano rim into its distinctive sweeping curve. The name *Steinway & Sons*, found above the keyboard of every piano produced by Steinway, is immortalized as a fine engraving on the gold-plated cone ring, while the 750 gold nib is intricately engraved with a portrait of Henry E. Steinway himself, capturing the noble aspects of his character: determination, perfectionism and passion. The Montblanc emblem in black and white precious resin crowns the fountain pen. 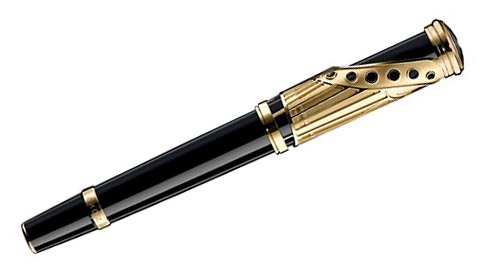